96 – How to Get Along with Difficult People

Note: This article is based on real situations, but details have been changed.

Whenever I hear that Bob is calling, I cringe. I’m amazed at how long he can speak without coming up for air. He sucks all the oxygen out of a room. He has to be the center, in control and, above all, loved.

Bob has a real problem – me. You see, Bob’s problem is that I am not honest enough to tell him that he’s selfish, and that he needs to “share the air.” So we are dysfunctional. I would rather not like him than risk him not liking me.

Chase has never had an unexpressed emotion. When he feels irritation, he blows up. If his wife says anything while he is venting, he explodes into a fusillade of four letter words.

She has decided not to let him determine whether or not she is happy, so the relationship is not dysfunctional. But the marriage is still challenged because he is such a difficult man to live with.

Will does great work, but he doesn’t think before he speaks. Every day his boss has to soothe someone else’s hurt feelings. His boss wonders, “I don’t care how good he performs, is it really worth the trouble?”

Wayne always has nice things to say to your face. But when he’s not talking to you, he’s talking about you. He is two-faced.

Tom has constructed his own fantasy world. The big deal is always just around the corner. After 20 years, his wife knows it’s never going to happen. When she asks him to consider a job that can pay their bills and help get out of debt, he waves her off and launches into a positive thinking speech.

These men didn’t learn the lessons offered in kindergarten-share your toys, play well with other children, and only talk when it’s your turn. We all have to deal with difficult people, and some of us are the ones who are difficult. The Bible is not silent about this. In fact, the Bible is vocal about relationships. A huge amount of the Bible focuses on horizontal Christianity-loving and getting along with people…even difficult ones. The Bible gives us principles of engagement and forgiveness.

The main problem in getting along with people is that they are so human and quirky. No doubt Paul had our human frailty in mind when he said, “Make allowance for each other’s faults” (Colossians 3:13, NLT).

So, the first principle of engagement is: “make allowance for each other’s faults.” Expect people to let you down from time to time. Don’t expect a difficult person to suddenly grow up.

I find myself always coming back to these two Scriptures…

“He who covers over an offense promotes love, but whoever repeats the matter separates close friends” (Proverbs 17:9).
“A man’s wisdom gives him patience; it is to his glory to overlook an offense” (Proverbs 19:11).

If someone rubs you the wrong way, you have to decide to hit back or let it go. The Bible is clear that human relations work best when we overlook each other’s human (not moral) faults, don’t repeat matters best kept confidential, and even overlook it when we are wronged.

Which brings us to the second principle of engagement: “let the little ones go.” This is living above the floodplain. It’s high ground, and terrific if you let the Holy Spirit lead you there, which is hard when a difficult person is dragging you down.

The opposite of letting little ones go is escalating offenses out of proportion. When a difficult person is being difficult, don’t try to match blow for blow, or the “situation” will soon be out of control.

Men, can I be brutal? We are pros at making mountains out of molehills. We pick, pick, pick at our wives over peccadilloes when we are really raging against unspoken issues. One man went ballistic because his wife used a plastic sandwich bag that he had laid out for himself. What was that about? She was so mad she went to work without her wedding ring.

“Starting a quarrel is like breaching a dam; so drop the matter before a dispute breaks out” (Proverbs 17:14).

So the third principle of engagement is: “don’t escalate small offenses.” If you are not practicing these first three principles of engagement, you may be difficult to be around. Don’t let it get the best of you. The Bible says, “A man’s own folly ruins his life, yet his heart rages against the LORD” (Proverbs 19:3). It’s not fair to blame God because we’re acting like a jerk.

How can you find out if you’re difficult? Through self-examination, of course, but also by inviting honest dialog with your loved ones.

The secret of functional families is honest communication, especially in conflict resolution. This is the key underlying it all. If a family doesn’t get this right, all kinds of dysfunctional patterns begin to develop. The less honest, the more difficult. The more difficult, the deeper the dysfunction.

In the 1940s Tom drove his brother, John, and John’s pregnant wife to the hospital because it was time for the baby to come. One the way, Tom had a small fender bender. John said, “I’ll pay to have that fixed.” For whatever reason, he didn’t. For the next 20 years the two brothers didn’t speak.

Tom’s son, Doug, recently told me, “To this day I have never met my cousins and I don’t even know their names.”

The first principle of forgiveness is: “Are you sure you have counted the cost of withholding forgiveness?”

Sometimes grievances are sticking points. Brent’s mother stomped out of his house, cutting short a Christmas visit. She vilified Brent’s wife, calling her a terrible mother. Brent couldn’t let this go-it wasn’t a little one. He kept demanding that his mother apologize. She won’t. She’s old, crotchety, and has always been a grump.

Frankly, an apology is never going to happen. Brent had to make a decision. He could forgive unconditionally or make the apology a requirement. His mother is difficult, but the bitterness he felt toward her was eating him alive.

Then, Brent discovered the second principle of forgiveness: “we must forgive others without regard to whether or not they are sorry.”

Jesus said, “And when you stand praying, if you hold anything against anyone, forgive him, so that your Father in heaven may forgive you your sins” (Mark 11:25).

Notice in this verse that we are told to forgive without regard to whether or not they are sorry. Wow!

Bottom line: We can’t control the other person’s response, but we can obey Scripture. And what happens if we won’t forgive?

The third principle of forgiveness is: “to experience God’s forgiveness we must first forgive.” No matter how difficult a person is, we forgive them not only for their sake, but for our sake as well.

“Therefore, as God’s chosen people, holy and dearly loved, clothe yourselves with compassion, kindness, humility, gentleness and patience. Bear with each other and forgive whatever grievances you may have against one another. Forgive as the Lord forgave you. And over all these virtues put on love, which binds them all together in perfect unity” (Colossians 3:12-14).

1. Who is a difficult person in your life? Which principle from this article do you most need to apply to this relationship? Why? How will you do it?

Business leader, author, and speaker, Patrick Morley helps men think more deeply about their lives, to be reconciled with Christ, and to be equipped for a larger impact on the world.

95 - Affirmation - Shaping the Heart of Your Child
All Posts 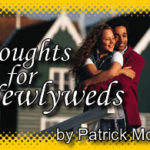