The Dynamics of Men’s Ministry Today

In the 90s, almost unimaginable numbers of men were attending Promise Keepers stadium rallies. Promise Keepers created a new Christian culture among men. These events responded in a culturally relevant way to men who know there must be more to their Christian faith. I’ve met men who didn’t know what to expect, but never a man who wasn’t deeply touched by attending. Many men felt supernaturally transformed by attending a single stadium event. It is truly a unique work of the Holy Spirit.

The difficulty with all mountain-top experiences, of course, is that you must return to the valley. Many men go to large-scale momentum events, get fired up, come back excited, try to start a men’s ministry, and find men respond –for awhile. But then other pressures set in, there are bills to pay, they get distracted, they can’t generate big numbers, the flame burns down, and they become less and less interested in the work of building the kingdom. So the leader becomes discouraged, gives up, and waits for the next mountain-top.

This may be why the heady stadium days of the 90s PK era – which reached its zenith in 1996 in Washington, D.C. with Stand in the Gap – gave way to arena events in the 2000s and large church events in the 2010s.

But this movement from the stadium to the church is not a disappointment. It’s a necessary paradigm shift. It mirrors the movement of men’s discipleship from the public large group setting to the halls of the church and at tables in coffee shops.

In other words, the stadiums created momentum, the arenas captured it, and the church is where it’s sustained for the long term. Why? Because only in the church will men find consistent, dependable opportunities to engage in life-on-life discipleship. In a word, it’s about relationships.

If you are tired of the mountain-top experience style of men’s ministry, check out our new GO: Jumpstart Your Ministry to Men. We developed it with leaders like you in mind, to help you create momentum with your men and lay the foundation for a strong men’s ministry—and you don’t have to reinvent the wheel.

So, what are the components of a strong men’s ministry? Why do some men’s ministries lose steam? Why does the initial excitement fade away? Is it inevitable? How can we keep the passion? How can we build other men in their faith?

Those are some of the questions we will address in this series of articles, Building a Strong Men’s Ministry.

(Note: Many of these same principles from this series of posts have been expanded on significantly in our book, No Man Left Behind, and the training it is based on.)

Which Is Harder (Or Easier) To Believe?
All Posts 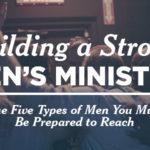 The Five Types of Men You Must Be Prepared to Reach

Subscribe and receive a free, digital copy of the Reach 3 Card to use in your ministry!