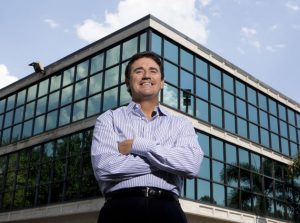 Ed Kobel, the president and COO of DeBartolo Development, runs a consulting ministry as well called Elite Warrior Consulting. He’s passionate about helping other business owners and entrepreneurs integrate their faith more fully into their lives.

In 2007, during what he calls his ABIDING time, Ed sensed God prompting him to start liquidating real-estate assets. At that time, the global markets were booming, especially in the real-estate space. And although these words from God seemed counter-intuitive to all the economic data, Ed obeyed God’s voice.

Then in 2008, the crash happened. Real estate had come to a complete halt. But because of Ed’s obedience, he and his company were poised for great success. They were able to position one billion in assets into more than five billion in a very short period of time.

His company has been able to experience some great accomplishments over the course of their lifetime. From his father inventing the regional mall to his brother winning five Super Bowl rings with the San Francisco 49ers, there is much for this family to be proud of. But nothing matters more to Ed than hearing from His Heavenly Father during his daily ABIDING time and being able to carry out His will daily.