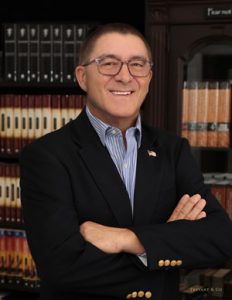 Peter was born in London, England, but lived most of his life in South Africa, where he enjoyed a successful business career. Before emigrating to the U.S. in 2005, he was the CEO of Stamford Sales, a national distribution company, founded by Peter and his wife Elize.

In 2006, Peter was born again after meeting Christ in a dramatic encounter, and in 2009, he traveled to India and Nepal in preparation to write his book A Big Life, which was published in 2011. Later, a second book was published, Boldly Whispering the Name of Jesus.

In 2014, Peter felt an unmistakable call to disciple men and was employed that year as the Southwest Florida Area Director for Man in the Mirror. He enjoyed considerable success in helping churches with intentional discipleship processes in the communities he served, as well as supporting other Area Directors as the Florida Regional Director. In 2020, Peter stepped into his current role on the Headquarters team as National Development Director.

Peter and Elize have four sons, two of whom are living in South Africa, and four grandchildren. Peter currently serves as a Deacon, Bible teacher, and choir member at his home church in Naples. He also leads the weekly men’s gathering Man in the Mirror, Naples. He is passionate about discipling men to grow to become faithful husbands, strong fathers, and disciple makers.

Give to Man in the Mirror