Men’s Ministry. How hard can it really be? Think about it: You’ve got men; you’ve got a church. Add a testimony, some pancakes, a prayer, and—poof!—a men’s ministry. Right?

We’ve worked with thousands of churches across America to help them disciple men. Leaders from churches all over the world have been through our leadership training classes. To encourage and motivate these leaders, we used to tell them: “Look. What we’re trying to do here is not rocket science.”

Why? Because men’s ministry is just grueling. As one of our leaders has said, “A man is a hard thing to reach.”

The Paradox of Men’s Ministry: It IS Rocket Science

When you are working with rockets, things are pretty objective. It’s all about physical laws and mathematical concepts like gravity, velocity, angles of ascent, and coefficients of drag. But men are not nearly as predictable. Rockets don’t get laid off, have trouble with their kids, or endure a health crisis.

Still there are some parallels between rocket science and men’s ministry. For example:

If you’ve been struggling to get traction in your men’s ministry, this should bring you relief and hope. It brings relief when you understand it’s not just you (it really is hard to reach and disciple men) and hope because we have a strategy we’ll be showing you that can help you do it. You can reach men in your church. You can help them grow closer to Christ.

The Physics of Men’s Ministry

You must accept several constants, however, if you are going to launch and sustain a powerful men’s ministry. Here are three realistic parameters to remember:

From Prototype to Manufacturing

The hard, cold reality is that we will not see a revival in America and the world if effective disciple-building of men in churches does not move from the prototype stage to the manufacturing stage. What do we mean by that?

Imagine you were alive in 1900. You might have seen an automobile drive through town. People would have gathered to point and stare at this unusual apparatus. But only twenty-five years later, to see an automobile would have been no big deal. Why? Because in 1913 Henry Ford invented the assembly line with a conveyor belt. By 1927 the Ford Motor Company had manufactured fifteen million Model T’s! Ford helped move the auto industry from the prototype stage to the manufacturing stage.

Right now, hundreds of churches are doing a wonderful job discipling men. You may have heard about some of them—we can all point and stare and learn from their success. But there are more than 360,000 churches in America (as of 2012).

Our passion is to see a dynamic disciple-making ministry to men in hundreds of thousands of churches. Discipling men needs to move from an unusual activity in a few churches to a common characteristic of the life of most churches.

What about your church? In business, there is an axiom: “Your system is perfectly designed to product the results you are getting.” Imagine a factory where the front fender falls off of every third car that rolls off the assembly line. The manufacturing “system” of the factory is perfectly designed to produce cars that have a one in three chance of a fender falling off!

This applies to more than manufacturing processes. The same came be said of ministry systems (or models). In other words, the discipleship “system” of your church is perfectly designed to produce the kind of men you have sitting in the pews (or not sitting in the pews, as the case may be).

That’s why at Man in the Mirror we focus on helping churches by equipping and training leaders. We will be presenting you with a system designed to sustain an effective disciple-making ministry to men in your church. This model has been proven in local churches—it’s a system that works, a system that’s designed to create passionate disciples of Jesus. The model demonstrates how to build a “people mover” to disciple men within your church. Just like a moving sidewalk at an airport or an assembly line at Henry Ford’s factory, this process helps men get from where they are now to where God wants them to be.

In our next post, we will be laying out the different components of the No Man Left Behind Model and then continuing to expand on each of the concepts in future posts. We would love to hear your feedback: join the conversation on Facebook or Twitter @maninthemirror. 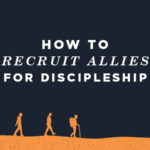 How to Recruit Allies For Discipleship
All Posts 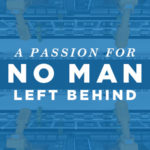 A Passion For No Man Left Behind