Can You Guess The 10 Issues Christian Men Say Matter Most?

(Intro to a 10-week series excerpted from The Christian Man [Zondervan, May 2019])

No man fails on purpose. Quite the opposite. When our feet hit the floor every morning, we’re looking for a win.

But these are turbulent times to be a man. Most of the Christian men I talk to find it increasingly difficult to juggle all their responsibilities as men, husbands, fathers, friends, workers, churchmen, and citizens. As my friend Nick put it, “It feels almost impossible to live out a biblical model of manhood.”

We all feel it, don’t we? Something about this world just isn’t right. There are so many “hollow and deceptive” voices phishing to get inside our heads. It feels like we’re being “hacked.” Spiritually hacked.

However, just as no man fails on purpose, as my colleague Jamie says, “No man succeeds by accident.” Which is why I felt strongly led to write a new book, The Christian Man, to pass on to the next generation of Christian men the best of what I’ve learned about biblical manhood during several decades of working with men as my vocation.

To make sure this book scratches where you itch, I gathered twenty-four Christian men from twenty-four to forty-seven years of age (mostly mid-thirties) on a Saturday morning to storyboard the question, “What are the issues and topics that would make you feel compelled to pick up and read a book for men?”

When the dust settled, we had a list of ten issues that mattered most. That list formed the table of contents. Can you guess what they said? Here’s the list…

Over the next ten weeks I’ll post an excerpt each week from one chapter until the book’s release date of May 19, 2019. Hope you enjoy the series!

A Passion For No Man Left Behind
All Posts 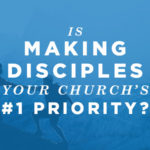 Is Making Disciples Your Church's #1 Priority?