The Silence That Deafens (Part 1 of 3)

It is a gut-wrenching time. By now, almost everyone has seen a police officer kneeling on a man’s neck for over eight minutes. A man who subsequently died. A black man. A fellow believer.

I may not be kneeling on anyone’s neck, but am I watching and saying nothing?

When my son got his license, I told him what to do if he got pulled over: Be polite and respectful, keep your hands where the officer can see them. It will be fine. This weekend a friend of mine who is black described the conversation he had on the same topic: “I told my son, ‘The officer has his job to do and you have yours. Your job is to get home alive.’”

Your job is to get home alive. No teenager should have that job.

I’ve worked in the juvenile justice system in New York state and at a large homeless shelter in Orlando, where many of our residents were recently released from jail with nowhere else to go. I’ve had conversations with young black men—residents and coworkers—willing to share stories of harassment and unequal treatment from people in authority who looked like me. Stories that shocked me but were obviously commonplace for them. Stories like Ahmaud Arbery are horrifying to me because they are so believable.

Racism, bigotry, and prejudice are still alive in America.

No matter your race, it’s easy to think that you can’t do anything about it. You’re one person, after all, and it’s a huge, systemic problem. It’s overwhelming!

But here’s the thing: you—and I—CAN do something about it.

In part two of this series, Pat Morley will share some simple, practical steps you can take as one person. I pray that you will take them to heart and act on them this week.

But I challenge you, right now, to make a personal resolution to fight injustice where you see it. We cannot, as Christian men, stand around as a witness to the brutality that our black brothers and sisters face—both in the guise of institutional racism and in everyday acts of prejudice and bigotry.
To paraphrase Bonhoeffer, not speaking is saying something. The silence of a Christian man not outraged by injustice is deafening.Click To Tweet

It’s not enough to “not be a racist.” We must be against racism in all of its forms. We must stand up for its victims and declare loudly, in the name of Christ, it’s not alright. When we see someone’s neck under a proverbial knee, we must stop it.

To be clear, the police officers involved in the death of George Floyd do not represent the vast majority of law enforcement. We have two former policemen on our Area Director team, and a current police officer who teaches at our weekly Bible Study. They are courageous, compassionate, righteous men who love and seek justice. A few bad actors can tarnish the reputation of an entire group, and that is a separate tragedy.

And that brings us to the protests and rioting that are happening simultaneously with the publication of this article. People absolutely have the right to protest and express their anger and grief over injustice. We’re called to this as believers. Isaiah 1:17 tells us to “plead the widow’s case.” And there are many other Scriptures that compel us to stand up for the oppressed.

Violence and looting, on the other hand, are unjustified and unproductive, as so many protesters themselves have said. Do not confuse the anguish, grief, and righteous anger of protesters with the unrighteous opportunism of rioters who care little for justice.

But we should never use those actions to justify our own lack of engagement or support in righting the wrongs that led here.

Christian men, I leave you with this: Do not withdraw into the comfort of your safe church, home, and community of friends. A righteous man always acts, speaks, and stands up to evil.

Like a muddied spring or a polluted fountain is a righteous man who gives way before the wicked.
Proverbs 25:26

THE BIG IDEA: We must stand up for the victims of racism; when we see someone’s neck under the proverbial knee, we must stop it.Click To Tweet 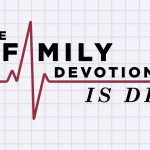 Resurrecting the Family Devotion
All Posts 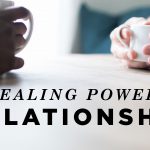 The Healing Power of a Relationship (Part 2 of 3)