Recently, we’ve been sharing case studies of churches that are using our resources to reach and disciple men. This week, we’re looking at Covenant UMC in South Carolina.

Tommy, a men’s leader at Covenant, shared with us about the critical, life-changing shift their ministry to men has undergone.

“We are one of the fastest-growing Methodist churches in the country,” he explained, “and our concern is how we can effectively reach all of these new men.”

This mission wasn’t always their focus, however. For years, the men’s ministry was largely event-driven, with the seeming goal of simply raising money for the women’s and children’s ministries.

“Yes, we are called to do good works,” Tommy acknowledged, “but we were missing the command to ‘go and make disciples’—we were a social club, not a men’s ministry. And because we weren’t making disciples, men would get burned out and leave.”

A New Model for Ministry

Then at the end of 2016, a couple of the leaders recognized they needed a whole new game plan and started researching our No Man Left Behind Model. The more they read, the more excited they became about the possibilities for their church.

But the linchpin, Tommy told us, was getting connected with Chris Rondeau, their local Area Director. “He was very accessible, insightful, and encouraging, and he helped get our senior pastor on board with this new approach.”

Yes, we are called to do good works, but we were missing the command to 'go and make disciples'—we were a social club, not a men's ministry.Click To Tweet

After they’d gone through the training and began making changes, Man in the Mirror released GO: Jumpstart Your Ministry to Men, a resource designed to help a church leadership team implement No Man Left Behind.

In its simplicity and completeness, it was the jumpstart they needed. “Our experience with GO was fantastic! It was a game changer for us,” Tommy said. “We were able to map everything out, and it provided great clarity of our mission of intentionally sending men forward on their walk with Christ.” 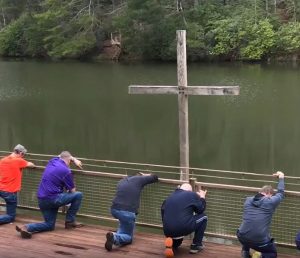 Men kneel at the cross during a retreat

As a result, the last few years were a fruitful season of ministry! In addition to gatherings around meals, small groups, and events, they offered retreats, which proved to be a powerful springboard for their men to go deeper in spiritual growth and involvement. From the retreat, leaders then helped connect men to either the GO men’s Bible study or the GO leadership study, based on where they were spiritually and their best next step.

Jeff and Brandon (names changed for privacy) are two men who have been deeply impacted by this strategy.

Jeff found himself at the church after his wife expressed the desire for a safe church home for their young, autistic son. He showed up at church with one hope—that it would require a one-hour-a-week commitment and nothing else.

But the men at Covenant had other hopes for Jeff; they met him at the Welcome Center and invited him to the upcoming men’s event. From there, he got plugged in and began to grow and lead. Tommy believes that one day, Jeff will be leading the men of the church!

He showed up at church with one hope—that it would require a one-hour-a-week commitment and nothing else.Click To Tweet

Brandon met Tommy as a new member, struggling to figure out how to be a good husband and father of two adopted children. He and his wife were believers, but they had never read the Bible. Brandon was invited by other men to attend the men’s retreat and has been in engaged in small groups ever since, including GO. “We are seeing Brandon’s spiritual growth blossom,” Tommy told us, “and his family is thriving. God is good.” 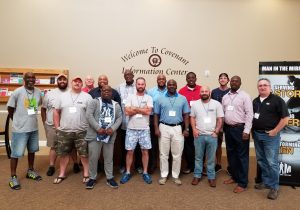 After seeing the impact from their new ministry model, Covenant decided to host our No Man Left Behind training last year for other churches in their community. With a passion to equip and encourage fellow leaders in the area, Tommy shared with them, “If you are tired of the ‘same old, same old’—a lack of commitment and excitement—this model will transform the way men do life and church together!” They came and learned alongside each other, committed to bringing transformation to their community.

Ministry to Men in a Shutdown

After hosting the training for other churches, Tommy and the rest of the leadership team had a 20/20 vision for 2020 and were geared up for the upcoming year, starting with a men’s retreat with the theme of Moving. Then COVID-19 hit and the world went into shutdown mode, including their church. “To say we were very disappointed would be an understatement,” he recalled.

But in line with their theme, they tried to keep moving. They established some regular Zoom calls for men’s Bible studies and small groups. Although it was a great tool to help keep some men connected, others were falling away from their ministry and the church.

They began to brainstorm ideas to reach these men who felt disconnected from each other and ministry. “We thought about what men like to do in the fall,” Tommy shared. “And tailgating was the number one answer.” With the help of Chris, they chose The Christian Man book and study materials and presented the concept of “Tailgate Talks with The Christian Man” to the pastor for approval. 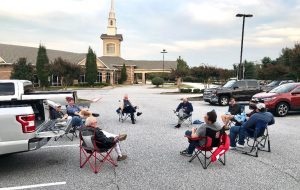 Their plan was that men would gather together in the church parking lot on Sunday evenings, and discuss the study together, all while following the current safety guidelines.

“The first week, we had 22 men sign up—15 of whom had never been engaged in the men’s ministry activities before and 3 of those from outside the church!” Tommy told us. “Each week we set up our camping chairs in a large circle. The time together has been fun and filled with great conversations.

“We have two weeks left before we grill out to celebrate the completion. We will work with Chris on what our next step should be to make sure we sustain the momentum from this great study!”

When Tommy reflects on what the ministry to men used to be compared to what it is now, he is grateful. “Today, we are more than a cook team or a setup team. We are men doing life together and growing in Christ!” He added, “Without the No Man Left Behind training, our Area Director, and GO, we would still be sitting in a meeting once a month, arguing and posturing over non-essential matters.

“While we are still a work in progress, we have great faith that if we continue down this path, our church will be turned upside down with men on fire for the Lord. We are seeing them go deeper in their relationships with Christ, their wives, their families, and other men in our church—our Brotherhood.”

THE BIG IDEA: Determination is not a strategy. If you want to transform your ministry, you must add to your determination the plan, resources, and support to be successful.

We know that Jeff, Brandon, and the three men from outside the church who joined the tailgate study represent just a few families out of thousands that are being impacted by men discipling men.

Thank you for believing in this mission with us. In God’s goodness, grace, and transforming power, discipleship changes everything. 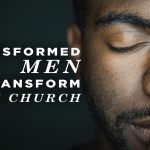 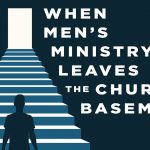